Residential living in or near Haymarket in Lincoln Nebraska

The Historic Haymarket name comes from the original market square of 1867 where wagons, camping equipment and hay were bought and sold. In 1874 the city shifted the area a few blocks west and north and renamed it “Haymarket.” The spirit of the 1800’s flows into Iron Horse Park located on the north side of the historic Burlington Northern Railroad depot. A three-dimensional brick mural, “Iron Horse Legacy,” shows old locomotive Number 710 pulling the first train into Lincoln in 1870 on July 4th. A restored CB&Q steam engine and 1890s water tower fountain are a must see. 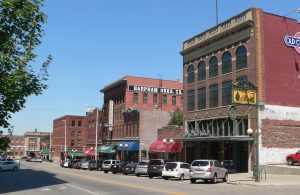 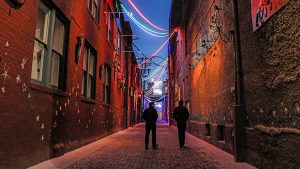 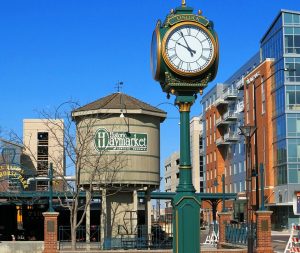 Lincoln’s Haymarket is the perfect combination of historic downtown and modern vibrancy. It doesn’t matter what you’re looking for; chances are pretty good that it’s here. 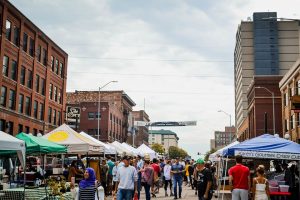 Every Saturday morning from 8:00 a.m. to 12:00 p.m. starting in May and running through mid-October, the Farmers Market comes to life. Goat milk soap, smoked mac & cheese, fresh vegetables and all kinds of artisan goods line the streets as throngs of Nebraskans weave through the vendor booths. 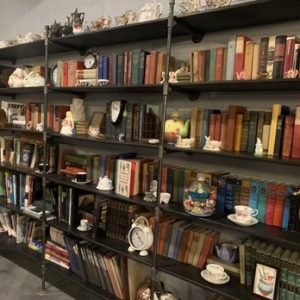 If you’re visiting at other times of the year, don’t worry, there’s still plenty to do! Stop by Crescent Moon for an amazing cup of coffee or tea, plus one of their stellar crepes. Looking for more sweet treats? Drop down into The Rabbit Hole Bakery where you can snag a fluffy, warm piece of coffee cake or a scone! 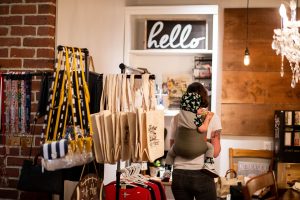 For your next stop, check out KD Designs, a mother and daughter-run jewelry business! Also offering small pieces of décor, they pride themselves on selling all hand-made products. Take a trip back in time at Trade-A-Tape/Comic Center and explore what has been one of Lincoln’s best comic stores for 30+ years. 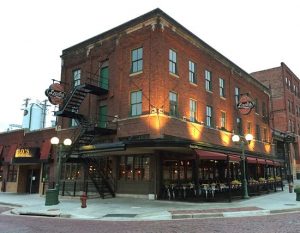 Lunchtime brings the promise of  more delicious food – one of the local favorites is Lazlo’s (home to Empyrean Brewing), a brewery and grill that offers contemporary American fare like their Baby Back Ribs. HopCat is another restaurant that never disappoints. With a massive beer list and  Cosmik Fries served with warm cheese sauce that’s the stuff of legends. 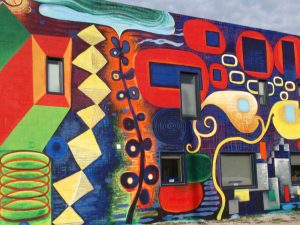 If you still have an appetite afterwards, head over to Ivanna Cone to grab a scoop of their handmade ice cream! The flavors on their menu, with names like Whimsidoodle, are always changing so each trip is a new adventure. Served up in an old-timey sodashop environment, it’s one of those places that nearly everyone in the city has been to. If you need to walk off some of your meal, head next door to view some art at the Burkholder Project artist collective and take some photos in front of the art wall! 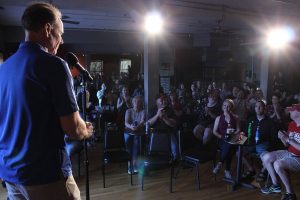 Book a time at Escape Lincoln to test out your problem-solving skills with friends in various themed escape rooms, or during the weekend catch a show at the Comedy Loft for a laugh or two! 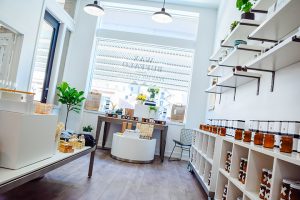 There’s also plenty to do during a regular weekday as well! Stop by Ten Thousand Villages to browse their collection of artisan-crafted goods from across the globe, or smell a few hand-poured soy candles at Wax Buffalo. 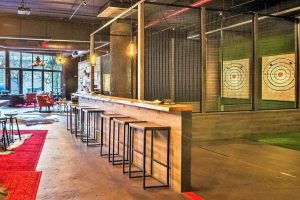 At this point in the day you may be getting a bit tired, so feel free to head over to Licorice International, where you can find the largest selection of licorice in the United States! There’s so much candy in that building you’ll wake up by just walking in the doors. You could also stop by The Mill for some caffeine in the form of delicious coffee and tea. On the other hand, if you do have plenty of energy still why not try out Tomahawks Axe Throwing? The name pretty much explains what you’re getting into. 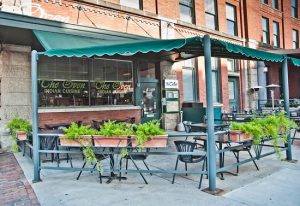 As dinnertime approaches there are plenty of options to choose from. The Oven, Rodizio Grill and Blue Sushi Sake Grill are all amazing Indian, Brazilian, and Japanese restaurants respectively. If those don’t suit you, Bourbon Street has an incredible gumbo and Plowboys is some of the best barbecue in Lincoln! 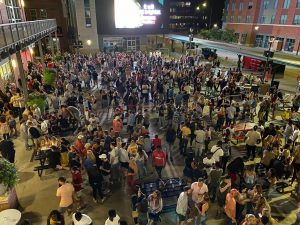 Late evening and nighttime are when the Haymarket really comes to life! Depending on the scene you’re into, there’s tons of options for hangouts. Looking for a bit of a rowdy time? Head over to the Railyard where there’s plenty of beer, music and screens. There are plenty of spots to find libations including the Starlight Lounge, Brewsky’s and McKinney’s to name a few. Additionally, it should be pointed out that McKinney’s has some fantastic food too!! 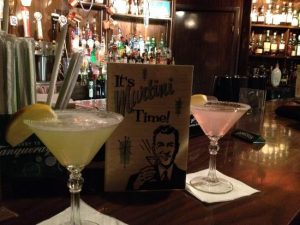 If you’re looking for something a bit more laid back then the VS Arcade Bar is a blast. Nothing like a beer and some old-school pinball or Ms. Pac Man all in the same spot. The Starlight Lounge, known for their handcrafted martinis, is a neat way to have a cocktail or two and pretend you’re in an episode of Mad Men. Kinkaider Brewing‘s taproom is a great place to kick back on the patio and try some of their beers while watching the bustling Haymarket around you.

This is by no means a comprehensive list of activities, merely some suggestions and highlights. Truth be told, you could spend a whole week exploring Lincoln’s Haymarket and the surrounding area…which you’re more than welcome to do!

Looking for a place to stay while you are visiting Haymarket in Lincoln Nebraska?, check the hotels  near this location . 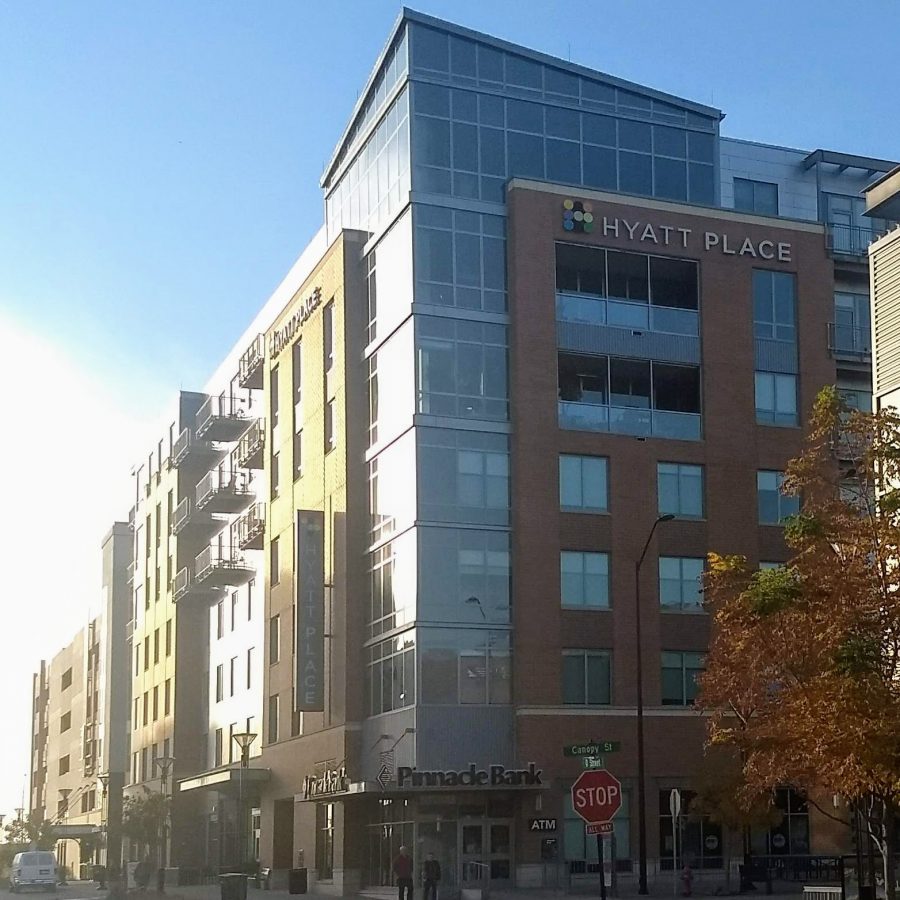 Located in the Historic Haymarket Entertainment District, Hyatt Place Lincoln/Downtown-Haymarket offers a restaurant and an indoor pool. A seating area, air conditioning, and large flat screen TV comes with every room at this luxury hotel. Other features of the rooms include a refrigerator, shower/bath, and hair dryers (for private bathrooms). In addition to cable channels, you also get luggage storage, a shared lounge, and a fitness center.

The Hyatt Place Lincoln/Downtown-Haymarket is located only a few blocks from Memorial Stadium and an hour’s drive from Eppley Airfield Airport. Compared to other properties in the area, Hyatt Place Lincoln/Downtown-Haymarket has one of the most prime locations in Lincoln and is a favorite among Pinnacle Bank Arena concert attendees. Below you will find more Hotels in Lincoln Nebraska. 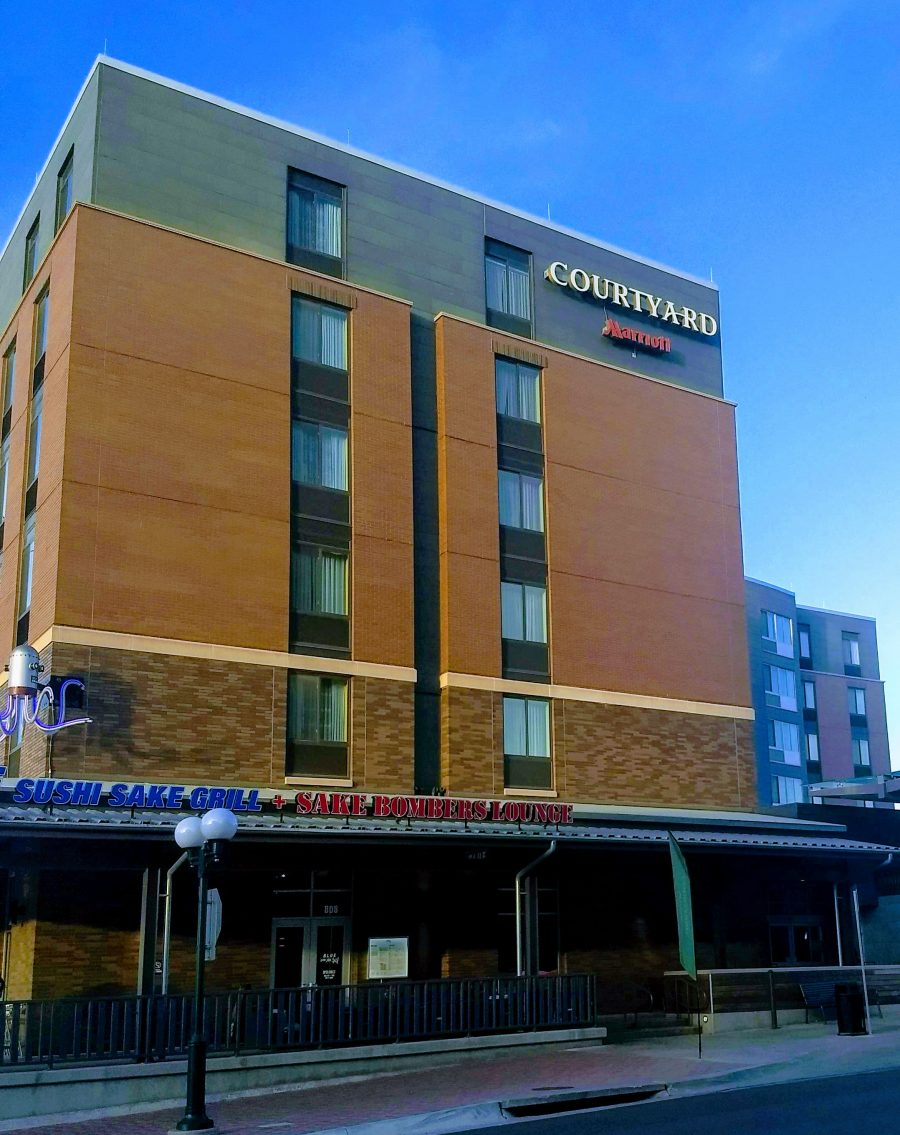 The Courtyard Lincoln Downtown/Haymarket captures the antique charm of the Haymarket in the nucleus of downtown Lincoln, Nebraska. This luxury hotel is a solid choice for social events, business travel, and weekend getaways. The Courtyard Lincoln Downtown/Haymarket is centrally located near Canopy Street & The Railyard, Haymarket Park, Memorial Stadium, Pinnacle Bank Arena, and the University of Nebraska campus. As a result, it lets you relish all the attractions that Lincoln offers.

Visit a nearby stadium and enjoy your favorite Husker team or enjoy a relaxed evening at one of the various bar venues or restaurants. If you’re a business traveler, your productivity will benefit from the sizable workstations, 24-hour business center, and high-speed internet access. Join other guests at the Bistro, where you can relish healthy cuisine and state-of-the-art conveniences. You will find more Hotels in Lincoln Nebraska below.

Located in the nucleus of the Historic Haymarket District of Lincoln, Nebraska, the Hilton Garden Inn Lincoln Downtown/Haymarket is just a few minutes away from various popular restaurants, attractions, and nightlife spots. Among these attractions are State Capitol/Governor’s Mansion, Memorial Stadium, the University of Nebraska, and the Pinnacle Bank Arena. Not to mention Haymarket Park, which houses the Lincoln Salt Dogs.

Guest rooms in this Lincoln hotel are comfortable, featuring a mini-refrigerator, a microwave, an HDTV, complimentary Wi-Fi, and an ergonomic chair. If you’re interested in a separate living area that has a sofa bed, you can upgrade to a suite. A cooked-to-order breakfast greets you at the beginning of the day and, in the evening, you can step into The Golden Grill & Bar for dinner.

Before breakfast or after dinner, sweat it out in the complimentary 24-hour fitness center. Or, you could chill with your friends by the convivial outdoor patio area or go for a swim with your family in the heated indoor pool. Need to hold a business meeting, no problem? There’s more than enough space at this 3,000 sq. ft. Lincoln luxury hotel. Before the meeting, you can organize the notes for your presentation at the complimentary 24-hour business center. 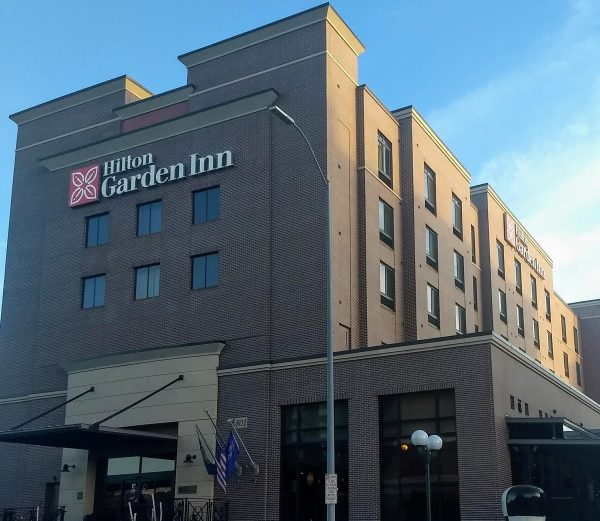 You will find more Hotels in Lincoln Nebraska below.

In the market to buy a downtown condo and need Financing? Click the button below

Click Here For More Information
Back To Top
Summary 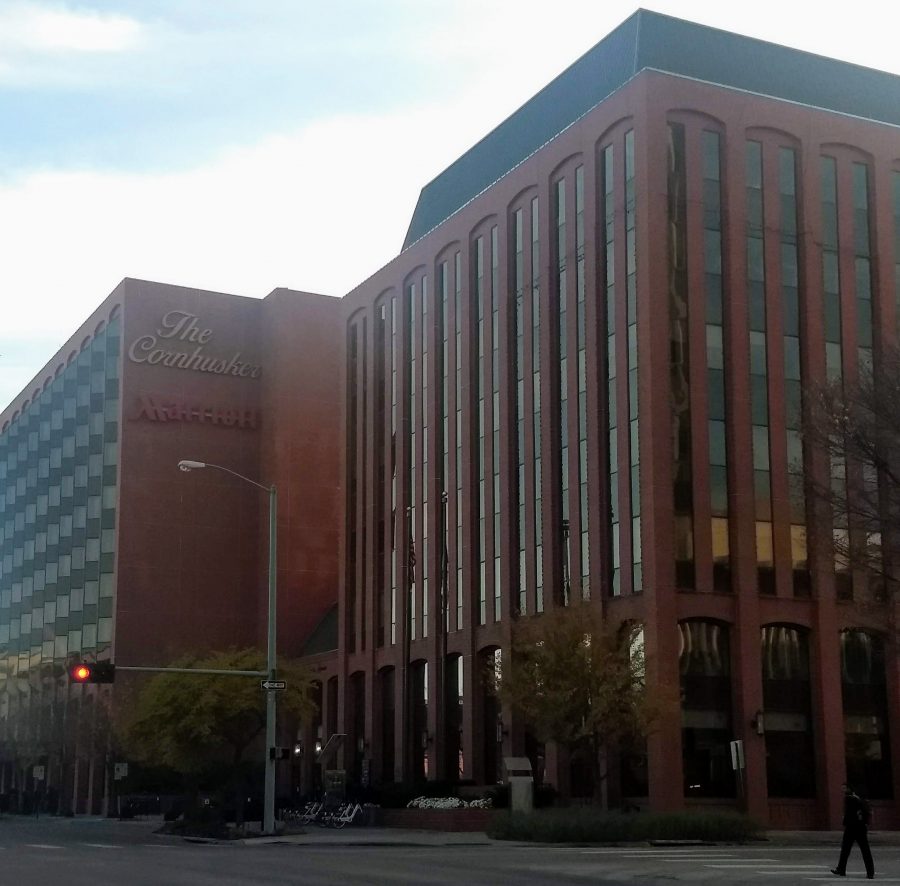 Article Name
Hotels in Lincoln Nebraska
Description
Description: Lincoln, Nebraska, has something for everyone traveling to the city, be it for business or pleasure. Here's a list of the best hotels to book when you're in town..
Author
Eric L. Brown
Posted in: Local Resources Tagged in: Condos for sale, Downtown, Haymarket, Historic Haymarket, Lincoln, Nebraska
View All Local Resources Posts
Share