Believe it or not, Lincoln Nebraska is home to some of the best Italian/Pizza restaurants. There is a variety of original and handmade Italian food entrees and dishes to be sampled and enjoyed throughout the city at the different restaurants. 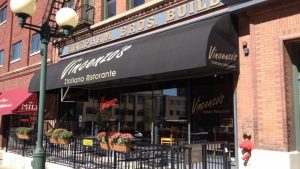 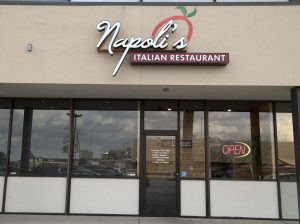 Both Napoli’s Nebraska locations are family owned and operated by Chef Besim Shala. Besim learned to cook in his teenage years working in some of Europe’s finest restaurants. In his twenties, Besim set out on his own and opened two successful restaurant in Europe before heading to the United States and settling in Nebraska.
His vision to open a classic Italian restaurant was realized first in Grand Island, Nebraska, and now in Lincoln Nebraska. Both restaurants offer some of the best Italian food in the midwest made from Besim’s own, award winning recipes, perfectly executed from only the finest ingredients.
The staff and family behind Napoli’s Nebraska offer great food and excellent service. They look forward to serving you soon. Come in for the food and service, and have a drink from their full bar while you’re here. And finish off your event with a fantastic dessert! 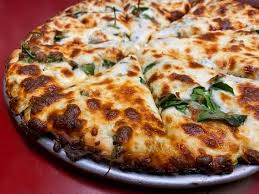 Piezano’s has been Lincoln’s favorite neighborhood pizzeria since 1982. Their pizzas are unlike anything you’ve tried. Known for our made-from-scratch crusts, delicious sauce, and ample amounts of cheese, their pizzas will bring back memories of when you were young.

​Piezano’s was originally founded by Dick and Diane Burner, who used their grandmother’s recipes to build the business into a local favorite. It is their mission to continue that tradition in everything they do – from the food they serve, to the service of their staff. They are very excited to continue the history of excellence that has kept Piezano’s around for decades. 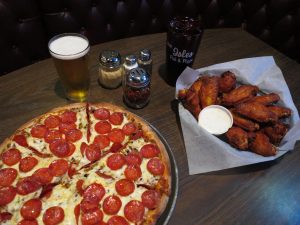 Bob and Grace Milton opened Misty’s restaurant in 1963. As their business became more successful they opened Misty’s II Pub and Grub across the street in 1975 to accommodate their growing clientele serving a menu revolving around steak and prime rib. In 1976, Misty’s caught on fire which resulted in them using Misty’s II as their main restaurant until Misty’s could be rebuilt. In 1977 they removed the original kitchen out of Misty’s II and replaced it with a dance floor and changed the name to Misty’s Isles. In 1981, a pizza kitchen was added and the name changed to Misty Italiano’s. In 1984, Dave Cole, a bartender at Misty’s purchased Misty Italiano’s. Dave and his staff spent many painstaking hours working on creating the perfect sauce with just the right amount of flavor and seasoning that would be a crowd favorite yet still be original. The name remained the same for a year and a half before holding a contest to come up with a new name to better define the business – The Isles Pub and Pizza or as most people call it “The Isles”.

The Isles has seen many changes over the years. The dance floor was replaced with tables to accommodate their growing clientele. The kitchen was expanded to the east into the unused space and former cigarette/liquor store where customers can now pick up their carry out along with any wine/spirits, beer, pop, candy, etc. with the convenience of pulling up to the front door. The lounge/restaurant has a pool table, juke box, video game and 8 high-definition TV’s for customers to catch the latest game on. They also subscribe to the NFL Network and free WiFi is available.

The Isles is a great place to stop before or after a game, concert, event or just to meet up with friends and family to relax and have fun. 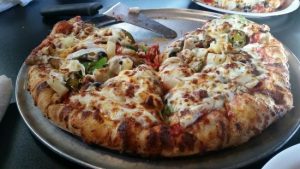 They offer a wonderful selection of toppings, and have some nice BBQ. The crust is so good it’s like a bread stick! 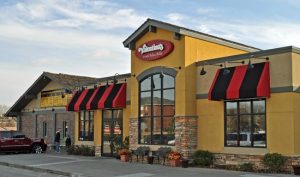 The Campus Fruit Market in Lincoln, NE
In 1957, Val and Zena Weiler operated the Campus Fruit Market in Lincoln, Nebraska. It was clear to them that their business would soon be eclipsed by the large supermarkets springing up across Lincoln. The landmark which had stood for a dozen years, had to go. In its place, armed with three dozen pizza pans, a recipe that had been in Mrs. Weiler’s family for years, and a generous amount of trepidation, they decided to open a pizza business.

They took in $60 their first day, and as the restaurant’s reputation grew, patrons began to gather and watch through the window as the pizzas were made. They would stand in line for an hour or more to sample the pizza and pasta specialties created in the original restaurant.

There was just one location then and no trip to the city was complete with out stopping to eat at Valentino’s!

About three years after the 1971 purchase of Valentino’s, members of the Messineo and Alesio families carefully formulated plans to expand into additional locations.

Through controlled expansion, and an elaborate system of quality controls, Valentino’s steadily grew. In 1990, Valentino’s opened its first Valentino’s To-Go location, offering take out service only. These stores were an immediate success. Today there are more than 18 successful To-Go locations operating.

Today, Valentino’s has expanded to 35 restaurant locations in 4 different states. The wait is seldom longer than fifteen minutes now, but the recipes and meticulous preparation steps remain.

Valentino’s success began with those wonderful family recipes that were passed on when the business changed hands in 1971. However, there’s more than recipes to this story. The highest quality food, reasonable prices, immaculately clean and comfortable restaurants, genuinely friendly service, and a written corporate creed which says that “community service is as important as the quality of the food”, have helped keep Val’s tremendously popular. 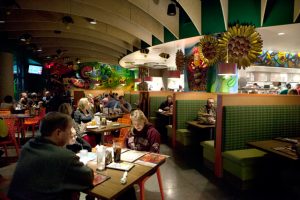 Mellow Mushroom Pizza Bakers was founded in 1974 in Atlanta, Georgia. The franchise, operated under Home-Grown Industries of Georgia, Inc., is headquartered in Atlanta, Georgia. For over 40 years, Mellow Mushroom Pizza Bakers has been serving up fresh, stone-baked pizzas to order in an eclectic, art-filled, and family-friendly environment. Each Mellow is locally owned and operated and provides a unique feel focused around great customer service and high-quality food.

Mellow is a state of mind, a culture, a way of being. Their mission is to provide delicious food in a fun and creative environment. They are the originators of hand tossed, stone baked classic southern pizza. Their spring water crust is unique and flavorful, and all their pies are made with high quality, fresh ingredients. Their philosophy is to elevate the dining experience with a higher order of pizza. Mellow out… 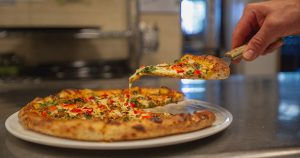 MoMo chef driven menu is as fresh and unique as the beautiful interior of the restaurant. Located in Preserve Development at Pioneers Boulevard and Lucile drive, patrons are welcomed at the entrance by the blazing wood- fired stone hearth pizza oven. The expansive dining area is finished in a modern yet rustic style with seating for 125. MoMo boasts a comfortable 25 seat bar and refreshing outdoor seating for patrons to relax and enjoy. The building and interior was designed by Studio 951 and Tammy Vande Guchte of New Age Design. Construction of the building was performed by Manzitto Brothers.

A separate party room is available for special occasions as well; MoMo creates an ambiance that makes people want to linger. 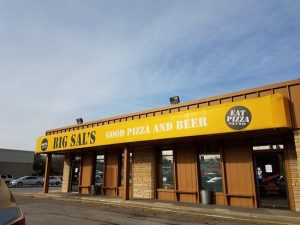 Customers join them for the fun atmosphere and are always surprised at how many food items they offer.

Watch your favorite sports team on their large TVs and play pool, darts or Megatouch. They have a daily happy hour and delicious food at affordable prices.

They think they rate pretty well when compared to the others guys. At Big Sal’s, they run an all-day special on Saturdays that includes a two topping large pizza and one pitcher of domestic beer for $17.99.